In December 2020, Apple made a strong decision: the publisher changed the way iOS, its mobile operating system, managed users’ privacy preferences, so that owners of iPhones and other iOS devices could indicate whether they wanted to be tracked by any of the apps on their devices (by default, Apple assumed that users did not want to be tracked and therefore prevented these apps from harvesting user data).

A decision that irritated Facebook. According to the social media leader, one of the solutions that will be hit hardest by Apple’s approach is its Audience Network advertising tool. The latter allows advertisers to extend their Facebook and Instagram campaigns to the entire Internet via thousands of high-quality applications. This company’s audience network helps software developers for mobile platforms deliver targeted in-app ads to users based on data from Facebook. Facebook claims that it would no longer be of any use if iOS 14 came out like this.

“Apple’s planned updates would make Audience Network so ineffective on iOS 14 that it wouldn’t make sense to offer it on iOS 14,” Facebook said in a blog post.

“While it’s hard to quantify the impact for publishers and developers at this point with so many unknowns, we’ve seen a more than 50% drop in revenue for Audience Network publishers during testing. when we removed the personalization feature from mobile ad install campaigns,” said Mark Zuckerberg’s company. “In reality, the impact for Audience Network on iOS 14 could be much greater, so we’re working on short-term and long-term strategies to support publishers through these changes.”

It’s not hard to see why Facebook was irritated! Almost all iOS users have opted out of being tracked. Without this monitoring, Facebook could no longer build the non-consensual behavioral records that are its stock in trade. According to Facebook, allowing Apple users to opt out of tracking cost the company $10,000,000,000 in the first year, with the company considering more losses thereafter.

Facebook has really gone into overdrive in its attempt to recoup those billions. The company bombarded its users with messages begging them to re-enable tracking. She threatened to file an antitrust lawsuit against Apple. She has led small businesses to champion user tracking, saying that when a giant corporation spies on billions of people, it’s a form of small business development.

And the EFF (Electronic Frontier Foundation) to note that:

“Time and time again, when people are given a choice whether or not to be spied on, they choose not to. Apple gave its customers that choice, and we should be really grateful.

Below is the EFF argument.

When “users” are “hostages”

In Facebook’s comments to the National Telecommunications and Information Administration’s “Developing a Report on Competitiveness in the Mobile App Ecosystem” filing, Facebook laments Apple’s ability to overrule its customers’ choices about which apps to use. they wish to execute. iOS devices like the iPhone use technological countermeasures to block “sideloading” (installing an app directly, without downloading it from Apple’s App Store) and to prevent third parties from offering app stores alternatives.

This is the subject of ongoing legislation on both sides of the Atlantic. In the US, the Open App Markets Act would force Apple to steer clear of customers who want to use third-party app stores and apps*; in the EU, the Digital Markets Act contains similar provisions. Some app makers, upset with the business requirements Apple places on companies selling through its App Store, have sued Apple for abusing its monopoly power.

Fights over what’s happening in the App Store usually focus on the commissions Apple takes from its software vendors – historically it was 30%, although recently some vendors have been moved to a reduced level of 15 %. It’s understandable*: many companies operate on margins that make paying a 30*% (or even 15*%) commission untenable.

The iOS business model is based on selling hardware and collecting commissions from apps. Facebook believes that these two factors combine to impose high “switching costs” on Apple customers. “Switching costs” is the economist’s term for all the things you have to give up when switching loyalties from one company to another. In the case of iOS, switching to a competing mobile device not only involves the cost of buying a new phone, but also buying new apps*:

Facebook is right. Apple’s restrictions on third-party browsers and limitations it places on Safari/WebKit (its own browser tools) have hampered “web apps”, which run seamlessly in a browser. This means app makers can’t provide a single browser-based app that works on all tablets and phones – they have to pay to develop separate apps for each mobile platform.

It also means that app users can’t just switch between platforms and access all of their apps by typing a URL into their browser of choice.

Facebook is in a great position to comment on how high switching costs can lock users into a service they don’t like very much because, even if they don’t like that platform, the costs of usage are outweighed by the costs the company imposes on departing users.

So when Facebook points out that Apple is using switching costs to hold its users hostage, they know what they’re talking about. 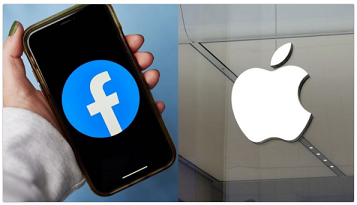 Facebook’s argument is that when Apple users disagree with Apple, user choice should trump company preference. If users want to use an app that Apple doesn’t like, they should be able to choose that app. If users want to leave Apple behind and go to a rival, Apple shouldn’t be allowed to lock them in with high switching costs.

Apple’s App Tracking Transparency program – the name the company gave to the transition to the version of iOS that lets you block apps from spying on you – was based on the idea that when you’re not agreement with Facebook (or other surveillance technology companies), your choice should override their preferences. If you want to use an app without being spied on, you should be able to choose this. If you want to quit Facebook and go to a rival, Facebook shouldn’t be able to lock you in with high switching costs.

Like Facebook – and Google, and other companies – Apple tolerates a lot of surveillance on its platform. In the spring of 2021, Apple and Google kicked some of the worst location data brokers out of their app stores – but left many to spy on your movements and sell them to third parties.

The problem with iOS isn’t that Apple operates an App Store – it’s that Apple prevents others from offering competing app stores. If you like Apple’s decisions on which apps you should be able to use, great! But no matter how much you trust Apple’s judgments today, there’s no guarantee you’ll see it the same way tomorrow.

After all, Apple’s editorial choices are and always have been driven by a mix of wanting to deliver a quality experience to its users and wanting to deliver benefits to its shareholders. iOS users’ inability to switch to a competing app store means Apple has more leeway to remove the apps its users love without losing customers.

Facebook is right that users should be able to choose app stores other than Apple, and Apple is wrong to claim that users who have that choice will be exposed to predatory and invasive apps. Apple’s objections imply that its often fantastic privacy choices cannot be improved upon. It is categorically false. There’s plenty of room for improvement, especially in a consumer product that can’t meet all of the specific, individual needs of billions of users.

User rights should not be left to the discretion of corporate boards. Rather than waiting for Apple (or even Facebook) to defend its users, the public deserves a legally enforceable right to privacy, which applies to Facebook and Apple…and any small companies that might appear to offer retail stores. applications or alternative user interfaces.

What do you think of the EFF analysis?

How Apple managed to play Facebook? Apple’s iOS 14.5 update would have triggered an unstoppable collapse in Facebook’s ability to collect data

iOS 14, Apple’s new mobile operating system, makes tracking people harder for Facebook, which says it will decimate some of its ad revenue

Facebook predicts $10 billion revenue shortfall due to iOS privacy features that have made it harder to track users since the launch of iOS 14.5